This month I’m participating in a new, fun challenge with twelve new and old blogging friends [well, this month it’s eleven but still!] It’s called Mystery Dish, and the premise is this: each month, one blogger will create a mystery box of ingredients. Ingredients can be themed related to a cuisine, a meal, a season, a specific ingredient, or anything else creative. Then, the other eleven bloggers have to create a recipe using some of the ingredients. SO FUN! 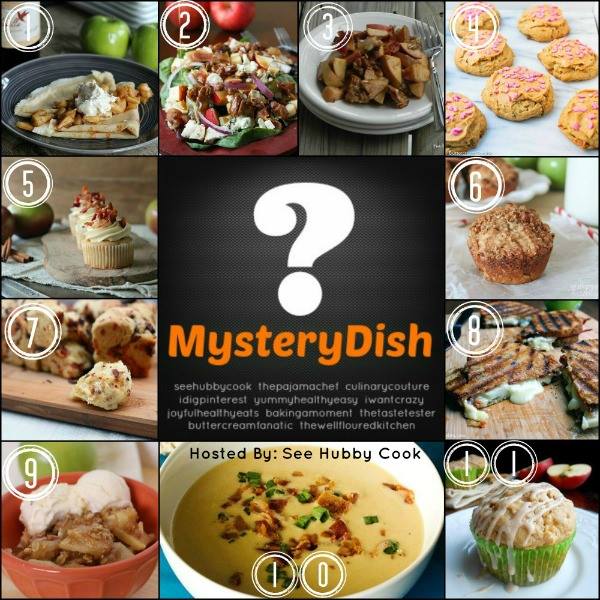 This month, the ingredients we had to work with included the following:

Thanks to Dani and JT at See Hubby Cook for brainstorming this challenge and the first month’s ingredients!

Of course, I like to make things difficult for myself and even though I knew this post would be live right around the date of our move [yes, we are in NASHVILLE now!], I wanted to include as many ingredients as possible, and managed to make a delicious dessert utilizing all ingredients but one. Peanut butter sadly was excluded, but all the others make an appearance in this fabulous pie-crisp! 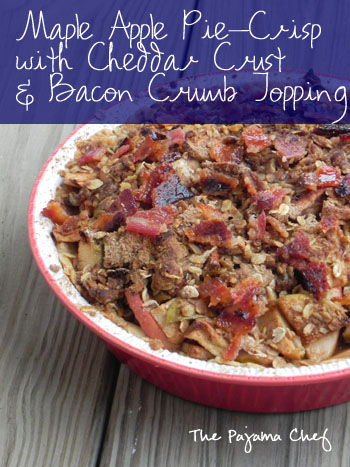 What is a pie-crisp, you may ask? Well, it’s something that was intended to be a pie but fell apart and as such, resembled more of a crisp than anything. No matter what you call it, Maple Apple Pie-Crisp with Cheddar Crust & Bacon Crumb Topping should be called delicious because that is exactly what it is. 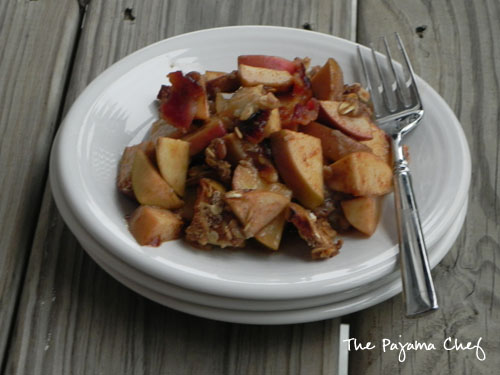 Let’s go through this fabulous dessert, shall we? It starts with a crust studded with shredded cheddar cheese. For appearance, I’d recommend using white cheddar, but since I wanted to use things up before the move, I just used a basic sharp cheddar. The filling is apples [Gala + Macintosh, but tart would be good next time too] sweetened with maple syrup and warm cinnamon, allspice, cloves, and vanilla. Simple, perfect, wonderful. I think I’m in love with maple apples now, and might try that in my next batch of applesauce.

Lastly, this pie-crisp is finished off with an oat-based crumb topping. Ben’s addition to the recipe [I say addition, but he actually made the crust himself while I lay miserable on the couch with a cold–go Ben!] was to cook up some bacon rubbed with brown sugar which he then crumbled on the pie as it cooled. The salty-sweet bacon was the perfect, surprising finishing effect to each bite of warm apple pie-crisp. This is a dessert I can’t wait to make again and again!

Be sure to check out the other recipes for this month’s Mystery Dish at the links below. Have a great Monday!

First, prepare pie crust. Pulse together flour and salt in a food processor several times, then gradually add butter, pulsing in between additions. Pour in water tablespoon by tablespoon until mixture begins to hold together–it shouldn’t be wet/sticky. Add cheese, pulse until combined. Add more water if dough is dry, then turn out onto clean countertop. Shape into a disk, then wrap in plastic and refrigerate at least an hour or better, overnight.

When ready to make pie, preheat oven to 425 degrees. Remove pie dough from refrigerator and rest at room temperature for 10 minutes.

Roll out pie crust on floured surface, then press into a 10 inch pie pan. Fill with maple apple filling, then prepare crumb topping.

Toss together oats, brown sugar, flour, cinnamon, allspice, and cloves. Cut in butter with pastry blender, then sprinkle evenly on top of pie.

Bake at 425 for 15 minutes, then reduce heat to 350 and bake for an additional 30 minutes or until golden brown and bubbly.

After temperature is reduced, place bacon on a foil-lined baking sheet and rub with brown sugar. Place in oven and bake for 15-20 minutes or until fully cooked. Remove and degrease, then crumbled over pie before serving.

Time: 3 hours or more [including time to chill dough]. 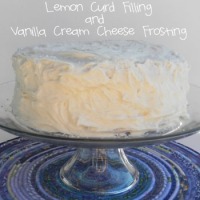